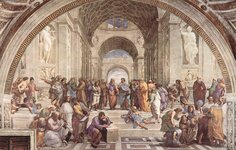 Who Has Organized Society ?
Creative Common by SA License

Human has got the capacity to be social. This comes from the monkey. But transforming society is now a matter of scientific creativity. The Chinese have always had a great nation. The Greeks created the first democracy.

Colbert, in France, created a revolution organizing growth, before the French revolution. Colbert allowed to create roads and canals, the first great national works. He was a genius of wealth creation linking.

Lazare Carnot, during the Revolution, created the most prestigious French schools in France.

Hamilton, in the United States fought for the public currency, to sublimate Colbert’s works, thanks to Henry Charles Carey too.

Then German education was built by Humboldt and Schiller. Then Johann Friedrich Herbart, poorly taken over, set up the emancipation of the German student, that is to say the German know-how. Einstein went from these schools.

Learn about these educators, scientists or politicians.

Here is the EBook. Here and here are sources.

Also in this section

Do I Have the Right Toys?
Which Job to Choose ?
Why Do Prices Grow ?
How Are We Here ?
Who Permitted That ?